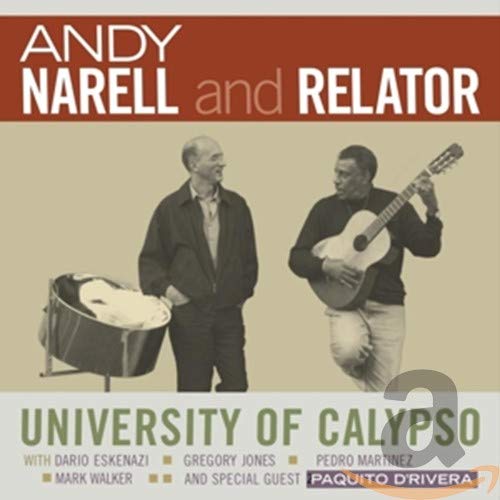 With Andy Narell--who's been playing calypso music from Trinidad since he was barely tall enough to reach the pan--it's always been about expanding the role of the steelpan in jazz. Now, with the release of University of Calypso, Narell joins forces with calypso legend Relator to explore the role of jazz in vintage calypso. Together, they perform 15 classic compositions by Lord Kitchener, Lord Melody, Mighty Terror, Roaring Lion, Spider, and Relator, supported by a group of world-class Latin-jazz cats who can swing the calypso and blow le jazz hot. It's been over 50 years since a major calypsonian went into the studio with a bunch of jazz players. This CD is cause for serious celebration!

"p"Following upon the critical successes of The Passage and Tatoom, Narell was invited to present a concert of his steelband music at the Trinidad and Tobago Steelpan and Jazz Festival, playing with the great Trinidad All Stars Steel Orchestra. While he was on the island, he sat in with Relator at a tribute to Lord Kitchener. "There were four different sets," Narell recalls, "ranging from solo piano to big band and steelband, and everybody played Kitch's music. Relator did a beautiful set with just his guitar and a percussionist, and at one point I heard him say that he had gone to the University of Kitch, and was proud to be one of its best students. I knew that Relator had sung in Kitchener's tent for 17 years, and that they were very close, and that he has a deep understanding of Kitchener's music. I've been playing Kitchener's music since I was a little kid, so the `University of Kitch' really resonated for me. When we decided to record together, I proposed that we call the project `University of Calypso' to capture that feeling that we share." "p" Narell and Relator also share a deep affection for classic calypso that infuses this session with a unique energy that hasn't been heard in a while. When Relator speaks of being a calypsonian, his passion for the art is clear. "Is a tradition we upholdin'. We know what standards are set, what values, and we stay true to that. We are true servants to de t'ing. We are not mockin' pretenders or exploiters or opportunists lookin' to be popular an' t'ing. We believe that vintage calypso must be preserved, and that is the line that we are on."

Hopefully, University of Calypso will help Narell and Relator bring this marvelous music to a new audience, all year round. "I believe this project has great potential to reach people," says Narell. "The music is so accessible, people can latch on to so many different things--the beautiful melodies, the groove for dancing, the stories told in the lyrics, the humor, the jazz elements, how the band plays together and interacts, the soloing--and on top of it all, we've got an incredibly dynamic guy out front singing these songs, a real storyteller in the great calypso tradition. I wanted to record some of this music right away in order to breathe life into the project and get it off the ground, but the real goal in my mind is to get in front of people and play it live.

TV shows and movies just for you

This week's top TV and movies

IMDb helps you select the perfect next show or movie to watch.
Watch Guide
Most Popular

Coming soon to theaters (US)

Please enable browser cookies to use this feature. Learn more.