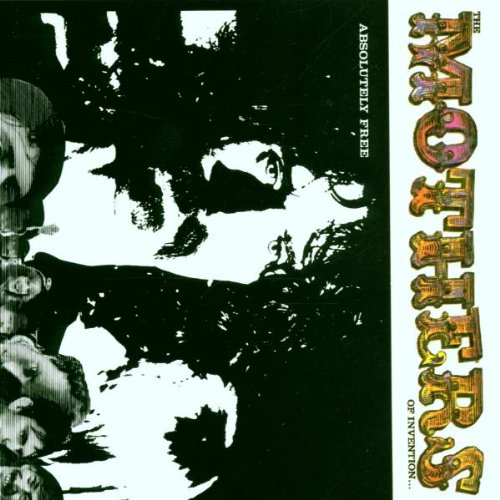 Ryko edition in the original green-tinged jewel case Second complex album by the original Mothers Of Invention from 1967. EX/EX

Sandwiched as it is between Freak Out!, Zappa's 1966 debut with the Mothers of Invention, and "i"We're Only in It for the Money, arguably his artistic zenith, Absolutely Free comes in a distant third--but that's only because the competition is so darn fierce. "i"Absolutely Free is a continuation of the weird freakiness--both in sounds and concepts--introduced on "i"Freak Out! "Plastic People" and "America Drinks amp; Goes Home" continue the artist's lampooning of Middle American values, while this time out, Zappa also seems obsessed with the fruits and vegetables that "keep you regular" ("The Duke of Prunes," "Call Any Vegetable"). The music here jumps from avant-garde jazz snippets to gritty garage rock to operatic vocals in a manner that was truly innovative at the time; in fact, it often sounded like true musical insanity. The definitive highlight here, however, is "Brown Shoes Don't Make It," a seven-and-a-half minute mini-operetta that initially ridicules America's suburban culture of the era before comically looking at the repressed sexual perversions hiding underneath that same culture. With its 13-year-old "Teenage Queen" ("who's rockin' and rollin' and acting obscene"), the Lolita-like obsession of the brown-shoed gentleman in the title, the track was a precursor to the naughty sexual themes later found in tracks like "Dinah Moe Hum" or the entirety of the Fillmore East, June 1971 album--themes that became Zappa's artistic stock in trade. "i"--Bill Holdship

"h3"From the Label "p"The second Mothers Of Invention album, originally released in 1967, continues Zappa's musical combo of rock/satire/jazz/doo-wop and more. With society at large still reeling from the assault of FREAK OUT!, Zappa went a few steps further with "Brown Shoes Don't Make It" and "Plastic People" -- two of his most pointed satirical pieces, and concert standards for many years to come; as was the cheerful surrealism of "Call Any Vegetable." The Mothers consisted of Jimmy Carl Black, Ray Collins, Roy Estrada, Bunk Gardner, Billy Mundi, Don Preston and Motorhead Sherwood -- heard here in all their glory.

At the time of ABSOLUTELY FREE's release, Zappa and company made a stab at hit-singledom with a seven-inch release of two otherwise-unavailable tracks, "Why Don'tcha Do Me Right?" and "Big Leg Emma," both of which are included here.

Any physiotherapist or physical therapist anywhere in the world can edit Physiopedia. Become an editor or join our volunteer programme to make your contribution.

Universities providing physiotherapy and physical therapy education are invited to involve their students to contribute content to Physiopedia as part of an educational project.

Get involved
The Physiopedia charity is supported by organisations that collaborate in various ways to help us in our mission to provide open education for the global Physiotherapy and Physical therapy profession.

“The International Committee of the Red Cross is proud to have supported three open courses developed and delivered by Physiopedia on lower limb amputee rehabilitation, managing children with cerebral palsy and clubfoot” - Barbara Rau ICRC